After I moved to Thailand from Africa, I noticed that Thais seemed to be infatuated with zebras. Zebra figurines are very popular in Thailand. 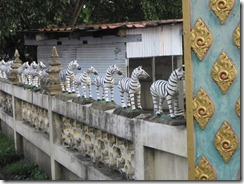 I’ve seen them at Buddhist temples, along roadsides, and in markets.

Zebras are not native to Thailand. They’re originally from Africa and live in the wild in countries like Zambia, my previous home. The only places in Thailand where you can find live zebras are in zoos and at Safari World in Bangkok. (Note:  I haven’t been to Safari World, but after going on safari in Africa, I’m not sure that I want to see it!)

I wondered about this interesting phenomenon and searched the Internet looking for information about Thais’ preoccupation with zebras. 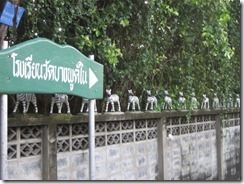 I didn’t find much. According to blogging site Women Learning Thai, the Bangkok Post had an insert that explained (vaguely) the symbolism behind the zebra:

“Animals are an important icon in Buddhism to remind people about their relation to the natural world. There is an interesting theory about why the zebra is the chosen statue around some Thai spirit houses. It’s believed that because a pedestrian zebra crossing is technically a ‘safe zone’ on the road, placing the statue at shrines can bring the same sort of protection to an individual. It is alleged that a monk told one truck driver to deploy zebra statues to ensure a safe path to success, and over time other Thais began placing similar statues.”

I have another theory. Zebras are black and white, which also happen to be the colors of yin and yang. If the story of the monk suggesting the zebra as a symbol of a safe path is true, it’s possible that he may have been influenced by Taoist thought.

Personally though, I prefer real zebras in the wild. There’s nothing like coming across a herd of zebras and knowing that your path is safe. If it weren’t safe, there wouldn’t be a zebra in sight! 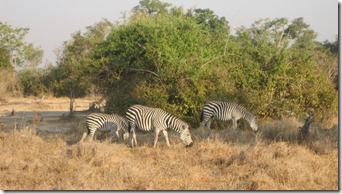