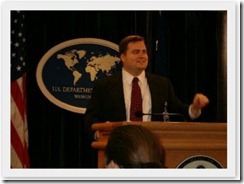 A post I wrote in October 2006 called “What is a Foreign Service officer?” ranks among this blog’s most popular entries. I wrote it during the heady days when I was looking forward to a long career as a diplomat and retiring from the Foreign Service. Alas, it was not meant to be. I resigned from the U.S. Department of State last year to pursue other interests, a decision that I do not regret and am thankful I made.

If you are interested in a career as a Foreign Service officer, you should seriously consider these points before embarking on the lengthy and competitive application process. I do not want to dissuade you from pursuing your dream, but you should be aware of some realities of Foreign Service life that are not well publicized. These views are my own but have been reinforced by years of firsthand observations and conversations with peers. Many of my colleagues shared these sentiments.

1. Worldwide Availability. You are expected to be available for service worldwide, and your personal preferences may not be taken into account. You may be called to go somewhere you don’t want to go that could put your life at risk. The needs of the service supersede yours. Expect to serve in places you may not want to be.

2. Separation. Be prepared at some point in your career to be separated from your family and serve unaccompanied. If your spouse or partner also works for the Department, expect to do separate tours at least once in your career, possibly more. As of last year, over ten percent of all posts were unaccompanied. If keeping the family together is your raison d’être, you may be disappointed.

3. U.S. Interests. Expect to promote U.S. foreign policy. There is little room for altruism and idealism if it does not coincide with U.S. interests. These interests depend on the administration in office, and whatever you advocated may change at any time. You do not serve your country. You serve the Federal Government and hope that it is doing what’s best for your country.

4. Frequent Moves. Be prepared to move frequently. In some cases, this may mean a short tour of one year or less in a conflict zone, a short-term assignment, an evacuation, or a reassignment to another post. You will move from place to place every two-to-three years, or sooner, unless you can find a different assignment at the same post. While moving from country to country may seem exciting to some, relocation ranks as one of the biggest headaches for Foreign Service families.

5. Bureaucracy. Get used to working in a bureaucracy. You work for the Federal Government. It may be “cool” being a diplomat, but you are still a member of the bureaucracy. Expect decisions and paperwork to move slowly through the system, if at all. Often they will be “overcome by events,” a fancy term that means you did a lot of work for nothing. You will do an immense amount of paper pushing in the office until you’re senior enough to have support staff to do it for you.

6. Unfair Rules. “Fair” is a four-letter word. Do not expect justice or fairness. The rules are written to be equalizers and may make no sense. Expect “no” as an answer to even the most logical requests and massage the rules until you get to “yes.” You are subject to the Foreign Affairs Manual and federal regulations. In a rule-based organization, those who know the rules and how to work the system tend to do better. Those who expect fairness, justice, or hold firm in their resolve often go wanting. The Foreign Service has few options for those who want to pursue a complaint because the rules were written with the Department’s interests in mind.

7. Multiple Clearances. Do nothing until you have cleared with everyone who needs to approve whatever you’re doing or face potential consequences. Your superiors are ultimately responsible for your actions under mission authority and can take disciplinary action if you misstep. If you’re a free spirit or like to do things your own way, think twice. Measure as many times as it takes to get full clearance and then cut.

8. No Privacy. Do not expect to have any privacy. Your life is on public display, and you are expected to lead yourself in public responsibly. Do nothing privately you would not want to see end up in the pages of the Washington Post. Everyone wants to know what you’re doing. Everyone, inside and out.

9. Unhealthy Work Environment. Expect to work with a variety of personalities from many cultures. Given its high-pressure working environment, the Foreign Service has elevated levels of stress that can negatively influence behavior. While many employees are excellent colleagues, the Department has its fair share of bad bosses and nasty coworkers. The Department’s hierarchical clearance and promotion systems are designed to give leverage to those in positions of authority. They can make your life miserable if you’re not compliant or simply rub them the wrong way. Try to get along, even if it goes against every fiber in your being, because with perseverance you too will rise to a position of authority and eventually exert your own leverage.

Michael Gene (M. G.) Edwards is a writer of books and stories in the mystery, thriller and science fiction-fantasy genres. He also writes travel adventures. A former U.S. diplomat, he served in South Korea, Paraguay, and Zambia before resigning in 2011 to write full time. He is recipient of numerous State Department awards, the Joint Civilian Service Achievement Award from the U.S. Department of Defense, and a commendation from the Ministry of Foreign Affairs of the Republic of Paraguay. He lives in Bangkok, Thailand with his wife Jing and son Alex. For books and stories by M.G. Edwards, visit his web site at www.mgedwards.com. Contact him at me@mgedwards.com or on Facebook or Twitter.

The views in this blog entry are solely those of the writer and do not represent the views of the U.S. Department of State.

52 thoughts on “I Am No Longer A Foreign Service Officer”