Yuzhno-Sakhalinsk, Russia (RFN) – The Russian Far East islands of the Kurils and Sakhalin voted to secede from Russia and rejoin Japan.

An overwhelming majority in the Russian Far East federal subject of Sakhalin Oblast, better known as the Kurils and Sakhalin, voted today in a controversial election to leave the Russian Federation and rejoin Japan. Exit polls indicated that 99 percent of voters favored secession from Russia and annexation by Japan, which had governed the islands from 1807 until the end of World War II. The referendum called “hasty” and “illegitimate” by critics was held ten days after former Sakhalin Oblast governor Alexander Khoroshavin and his top aides fled to Moscow following a period of political unrest in the islands’ capital, Yuzhno-Sakhalinsk.

The Sakhalin Oblast government led by interim governor Shigeru Kayano defended the vote as free and fair. “The will of the people is to rejoin the Motherland, Japan. The Russians are constantly trying to drive us into a corner because we have an independent position, because we maintain it, and because we tell it like it is and don’t engage in hypocrisy. But there is a limit to everything. Russia has crossed the line, playing the bear and acting irresponsibly and unprofessionally.”

Russian President Vladimir Putin and critics called the referendum a “sham” and a violation of international law. Election monitors banned from Sakhalin indicated that a large number of foreign workers in the local oil and gas industry were seen at polling stations. Some observers accused the interim Sakhalin government of preventing Russian voters from going to the polls and refusing to give voters the option to remain a part of the Russian Federation instead of independence or annexation by Japan.

Japanese Prime Minister Shinzo Abe denied his country’s involvement in Sakhalin’s move to return to Japan. The Japanese Diet is expected to approve the annexation, and Abe is scheduled to deliver a speech to the parliamentary body on the matter.

Putin decried the movement of ships in the U.S. Pacific Fleet off the coast of Sakhalin as a “dangerous escalation” to enforce the handover. U.S. President Barack Obama denied the claim and stated that the American fleet had been coincidentally carrying out pre-planned military drills in the Sea of Okhotsk. Putin warned that the moves could draw sanctions or a stronger response from Russia.

Before the March 21 disappearance of Khoroshavin and his $2 million Horch 855 Spezial Roadster, the Sakhalin Oblast government had been under pressure from foreign workers and indigenous minorities to ease up on “anti-non-Russian” political restrictions. After thousands of Ainu, Oroks and Nivkhs and foreign workers in the Sakhalin oil and gas industry took to the streets of Yuzhno-Sakhalinsk in early March, violence erupted when pro-Russian forces tried unsuccessfully to dislodge the protesters occupying Lenin Square. Interim governor Kayano chided the Russian government for what he called “heavy-handed tactics” and stated that “Russia pressed the spring too hard, and it snapped back.” 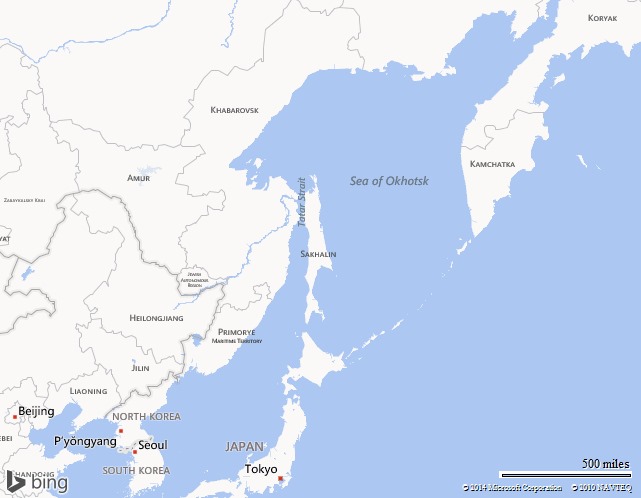 Los Angeles (RFN) – The American Civil Liberties Union (ACLU), citing possible civil rights violations on April Fool’s Day, set up a hotline to help end the practice of perpetrating practical jokes on unsuspecting fools the first day in April. The ACLU asks those who are potential victims of April Fool’s Day pranks to contact the April Fool’s hotline at their earliest convenience. The ACLU will prepare cases for eligible claims in an effort to combat this offensive practice. If you believe you have wrongly duped by an April Fool’s Day joke or prank and seek redress, contact the ACLU at 968-3665 (YOU-FOOL).

Visit RFN for all the latest news and information affecting your world.

You deal with it.

Click here to read the original article on MG Edwards. Visit MG Edwards for more great travelogues, photos, and video from around the world.